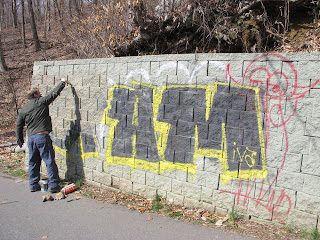 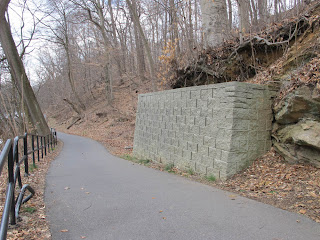 April, 2013 – Philadelphia is home to some of the most beautiful and unique parkland in the country: the Fairmount Park area and specifically Wissahickon Creek. This gorgeous natural landscape is accented by grand stone bridges, walls and staircases – many of which no longer serve a practical use, but still add character to the park. Unfortunately, in recent years these structures have fallen victim to vandals who have decided to mar the landscape with graffiti. These old structures not only contend with wear and tear from the elements, but are now covered in vandals’ “tags” and have transitioned from rustic landmarks to blatant eyesores. Luckily, local mural artist Zachary Bird of Smartwork Studio isn’t willing to stand for it. Using a technique called “faux painting”, Zack paints over top of the graffiti and makes the stone structures look as good as new. Much more visually appealing than the traditional white slab often painted over offensive tags, Zack is able to cover up spray paint, while blending his cover up with the color and texture of the surface he is painting on (see before and after pictures).

It’s ironic that Zack’s best work cannot be seen, as is the case with all faux painting – when done correctly, it can’t be detected. For now, his work has been limited to these relatively obscure stone structures in the park, but he has plans to make this a much bigger project. Zack states in his blog that he is in talks with Jane Golden of the Philadelphia Mural Arts Program and the City to hopefully gain access to SEPTA and Con-rail bridges along the Schuylkill River and I-76. If he is able to get permission to do cover up faux paintings in these areas, his work will be seen by a much larger audience, and thus have a much greater impact on the visual state of Philadelphia.